That’s right, its time! I am finally getting around to doing my full review of HHN 27. So lets get right to it, and get this show on the road! 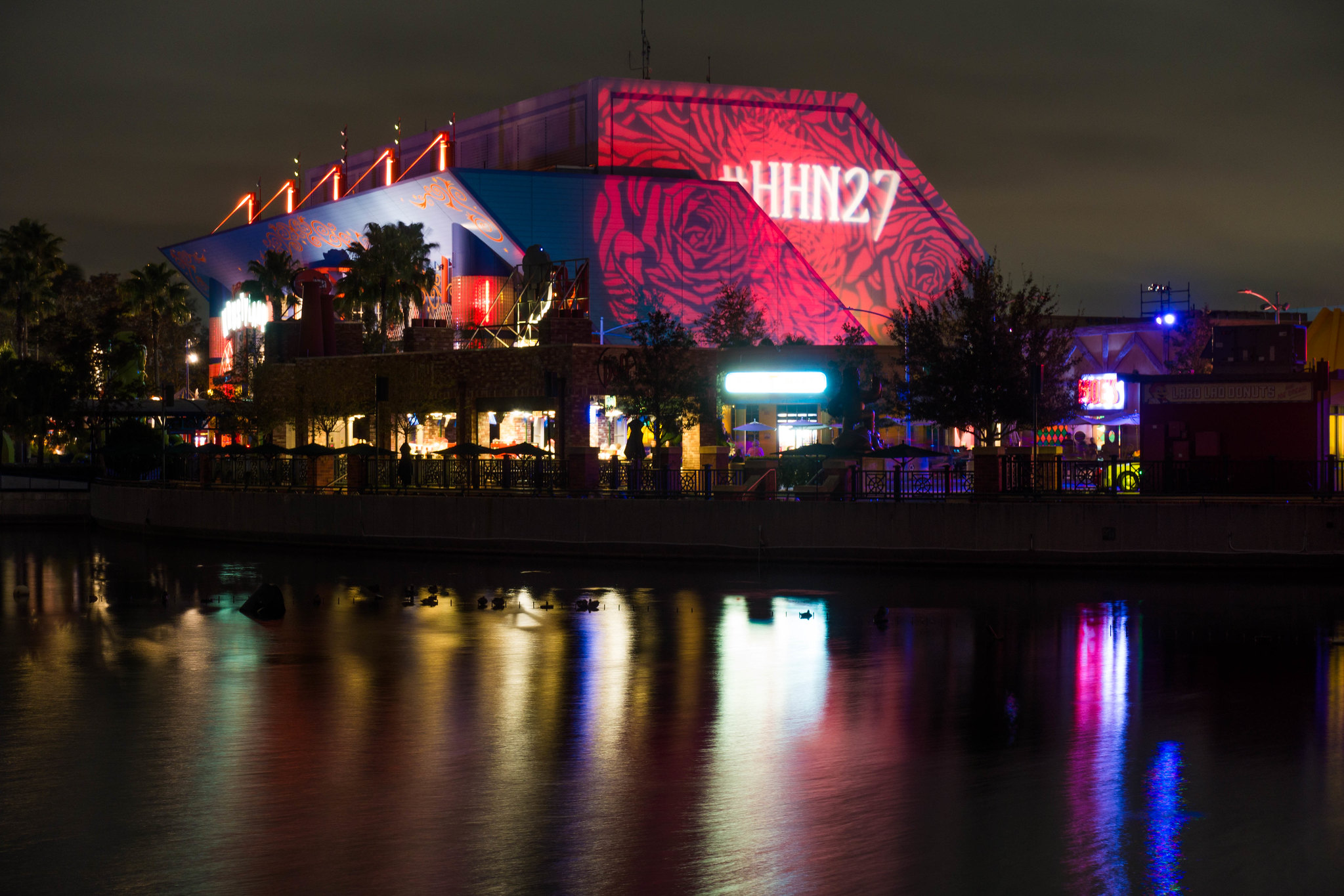 So there are a total of 5 scare zones this year; Altars of Horror, The Purge, Invasion, Trick r’ Treat, and Festival of the Deadliest!

This is the scare zone right as soon as you enter the park, and to be honest, is just a glorified selfie zone. So really not much to say, although, you can get some really cool pics with all the main house characters!

This is one of my favorite scare zones, and I was happy to see it return. Although not much has changed, except for a few more “mini shows”. I really enjoy this scare zone, and I think that it really holds up well. I think they should skip it next year, but I think it fits just fine this year!

To be honest, this is my least favorite actual scare zone, and I find it to be lacking quite a bit. I do think the aliens look good, but I just don’t think it is executed very well, and it just comes up short for me. If you really like old school alien stuff, you might like this zone. But, in the end, the zone is just not for me. 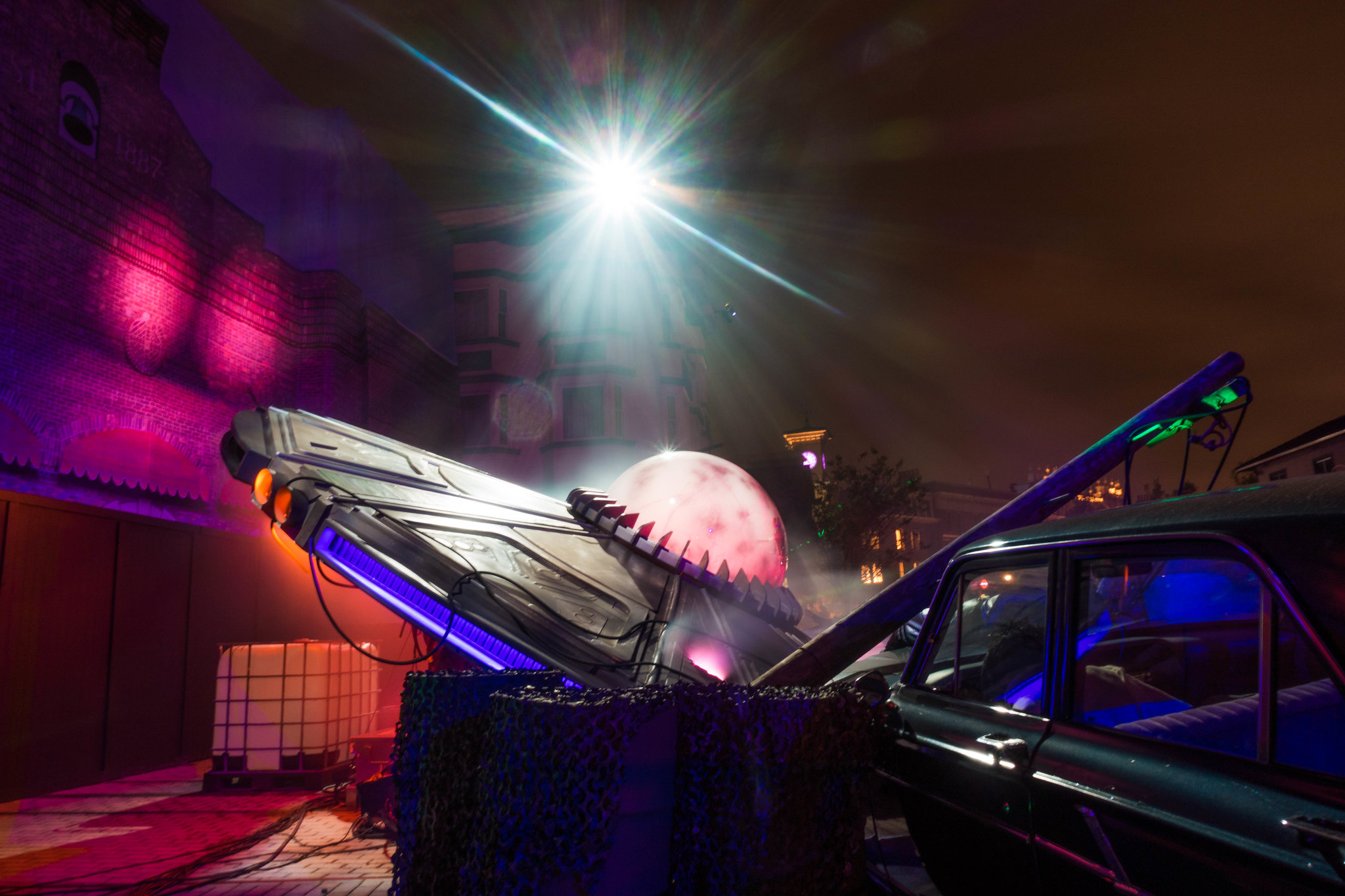 Now this is my favorite scare zone at this years event. I think that it is mainly just the ambiance that this zone gives out, it’s just awesome! Not to mention, that the visuals are just stunning! I highly recommend that you spend some time in the zone, and just take the time to appreciate it’s beauty! 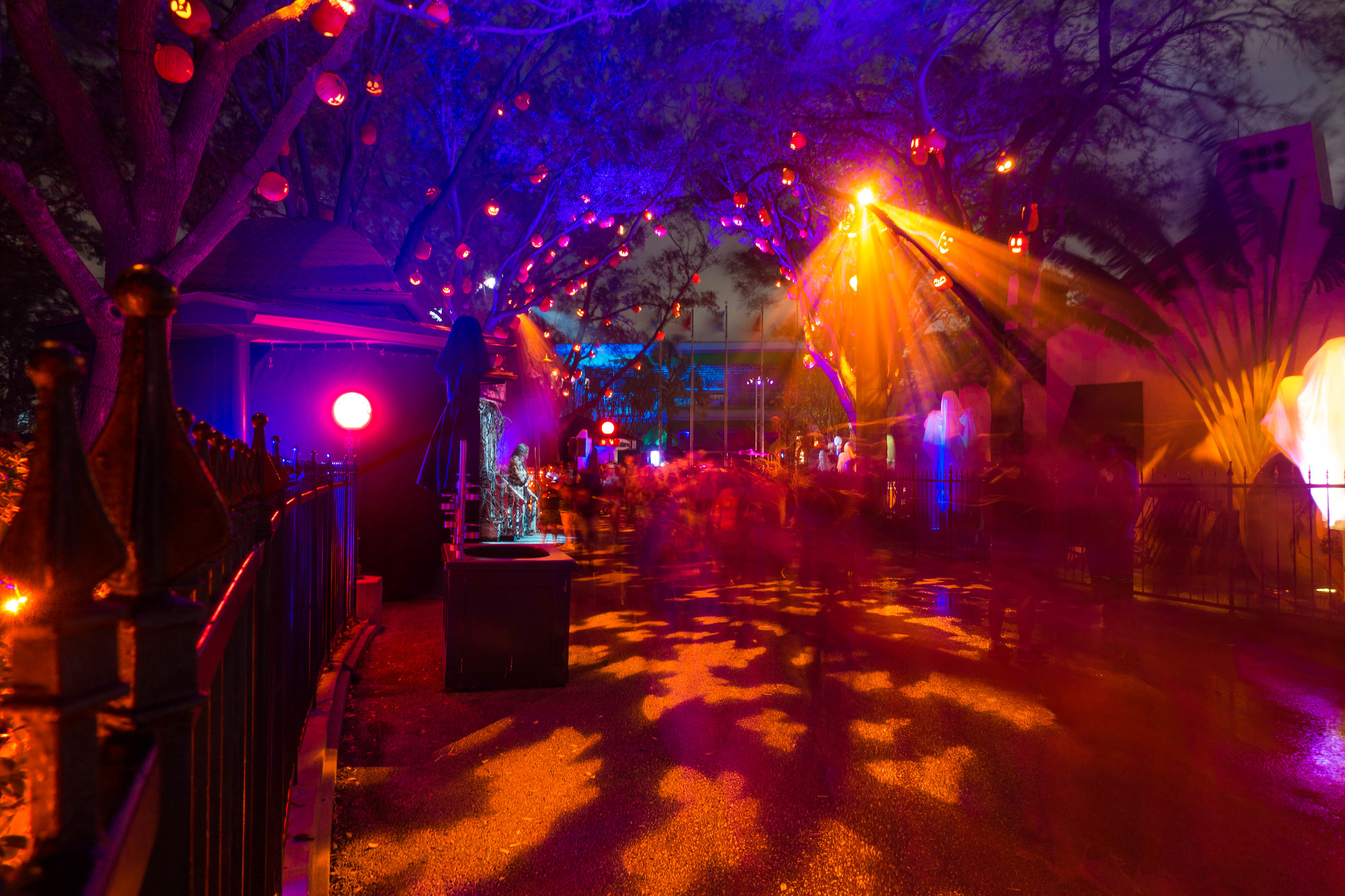 Festival of the Deadliest: 6/10

This is the scare zone that takes place in the Hollywood area of the park. It has been one of those types, that have improved over the course of the event. Mainly because towards the beginning of the event, they were having lighting issues. So this is a decent scare zone, and it is definitely better than Altars or Invasion!

This is my second favorite house of the event, it goes through seasons 2, 3, and 6. So it has some strong seasons in it, and I think that they are executed very well. I love the length of this house. Thats what I really loved about last years, and they brought the length back. Although it is not as long as last years AHS, it is still a great house, and I love it! If you are a fan of AHS, I think that you will agree that they pay homage to all of the seasons highlights well.

This house is fantastic! It really portrays the movie with excellence! My favorite part of the house it the Blood Elevator! I thought for sure that they were going to use a screen, but nope. The elevator is a full practical effect, and it is just great! I was kind of upset when the event first started, that they didn’t have Jack in the famous frozen face scene. But now that the event has progressed a few weeks, they have finally added him at the end, and I could not be happier about it! It is a great house, and a must do if you are going to the event!

This house by far, has the best facade out of the whole event. It is just amazing, and I could not commend Universal more for doing it the way they did. The problem with this house, is that the facade best part. I mean the house is decent, and it has some good scares. But the Voodoo Queen is only seen once, throughout the whole house. That being she is my one of my favorite characters, I really wish they would have had more of her in the house! Other that that, its solid, and I do think it is a good original.

This house is basically a “Kill Room” house. Meaning that each room is a different kill from the different Saw movies. They have everything from the drills to the head, to the scalp rip, and even the rib cage rip. As far as story there really isn’t any, and it is just gore type of stuff. Which is fine with me, and I do believe it is a good house in its own right. Its better than Blum House, but doesn’t stand up to the other IP houses.

This house is made up of three different Blum House Ips. Sinister, The Purge, and Insidious. To be honest, they might as well call this house Insidious! They have a few rooms for sinister, and like 1 1/2 rooms for The Purge! The rest of the house is insidious, and it is pretty decent. I really don’t think this is that strong of a house, and they should have focused on just one IP and the quality would have went up. I mean, it is by no means a bad house, but I have seen much better.

This house has the theme of a bunch of vampires holed up in a house in Carrie, Ohio. This is the weakest house of the event for me. I just am not a fan of the Nosferatu type of vampires, and that’s all this house is! I know some people will probably like this house, but it is not for me and I will not keep trashing on it. Just because it is not my thing. I will say there is a cool effect with some glowing eye contacts, but that’s about it for me!

I think this is the best original house! I think all of the sets are set up well, and I also believe that all of the scareactors are really well dressed. The big scarecrow at the end is one of my favorite parts of the house. Also, I love the room where is feels like crows are swarming you. I just think this is a really solid house! The facade isn’t the best I have ever scene, but it’s definitely better than a box with scrim on it. Oh ok, I said I would stop trashing on Hive haha.

This house! Man o MAN THIS HOUSE! I love this house, and I am sure it is because I am a big fan of the show. It just follows the show so well, and Ash is being his awesome self. This is my favorite house of the event, and I think they did a sick job on it. If you like this show, or even like the original movies. You should really make this house a priority! I just love it, and I hope that you do too! I will say that I wish they had even more One liners from Ash. Plus I have noticed they have had him stop saying groovy at the very end. Noting bad, just something I wanted to mention. Just an awesome house!

I will be honest here, I am not into the shows much at HHN. I have never watched a Bill and Ted show, and I don’t plan to watch the one this year. I am just not a fan of those types of shows. Same with Academy of Villians, I am sure they are great shows, just not my thing, and I really can’t speak on it. Hope that you understand, and respect that I can’t really give any imput. 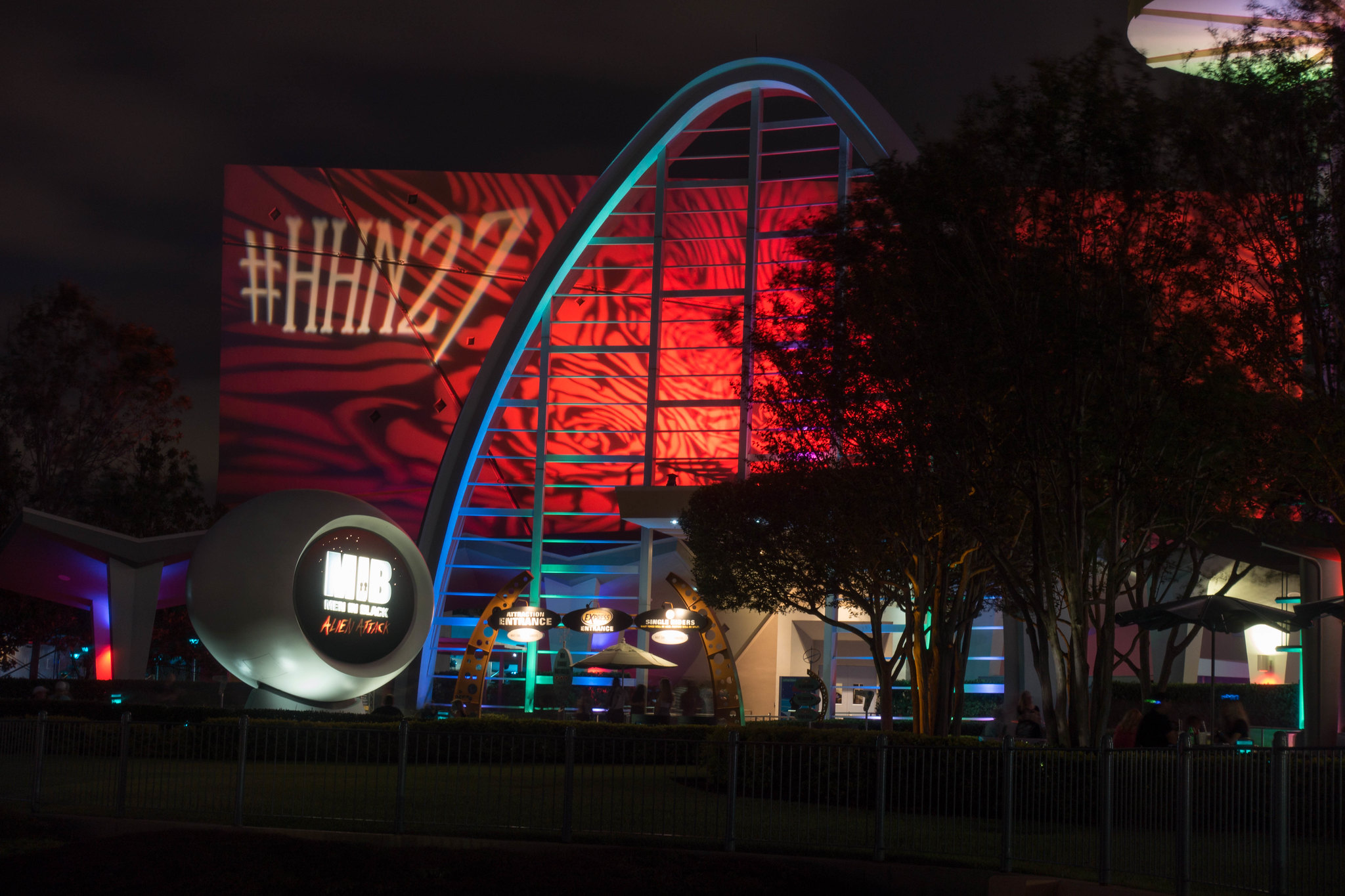 Overall I think this years even is really solid, and I would say that it is not as good as last years. But I do believe the IP houses are very good, except for Blum House. They should also do a better job next year, with having an overall theme. This years overall “Festival” theme just didn’t pan out in my opinion. Just kind of fizzed out, and I feel like they just kind of said heck it. I think that they are putting on a good show this year, and I would still call this the best theme park horror event. I don’t think there seems to be any other event besides Knotts that even touches HHN. If you have the chance to go, you should. Also, as always, if you have limited time, and you want to do all of the houses, get express. We love doing all of the houses every night we are there, and express allows this to happen. I want to also say, if you have a bad run through of one of the houses. Just give it another chance on another night. You can go in one house a bunch of times, and get a different experience each time! Anyways, that about does it for my review, and I hope that you enjoyed. If you have any questions, please feel free to contact me. I also have a few pictures from the event if you want to use them just use my contact page!